Things have been very quiet round here for rather a long time so let's get cracking on the New Year's resolutions a bit ahead of schedule. On Tuesday evening I was confonted by something of a fixture clash. Down in the city at the the Craft Beer Co a meet the brewer event featuring Camden Town brewery, including the launch of two new beers, was taking place. Just an hour later, in the more leafy realms of the Ham & High, two new beers from the London Brewing Co beers would be making their debut at the Bull. Being well aware just how easy it is to get "stuck" in the Craft, I was harbouring serious doubts that I would make it to both events but, aided by some prodding and cajoling from friends (to travel with them rather than leave them at the Craft, I'm relieved to say), I managed to do so and I'm glad I did. And I even found time for a last pint or two at the Southampton Arms too. 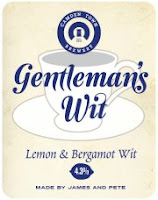 The first new Camden Town beer I tried at the Craft was Gentleman's Wit, described as a Lemon & Bergamot Wit, apparently utilising lemons covered in Bergamot and roasted for 20 hours. To be honest, I'm not sure what aromas and flavours Bergamot imparts but I do know (OK with a little help from Wikipedia) that it is used in Earl Grey tea and was a major component in the original Eau De Cologne - guess I would need to have been an England rugby player in the 80s to know what that tastes like. The beer certainly did have an aromatic, spicy character and plenty of sharp, citric bite. The appearance was pale and hazy. Very crisp and refreshing on the palate. Tart, with a little sweetness to balance things out. British takes on the Belgian Wit style can be pretty dire but this one hit the spot rather nicely for me. 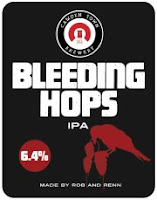 Next up was Bleeding Hops, a 6.4% IPA, heavily hopped with a whole cocktail of different hop varieties. To be honest, I was a little taken aback by the quite dark tawny colour. Perhaps I wouldn't have been if I had taken the trouble to read the blurb first. There were certainly plenty of juicy resinous hops in evidence. Lots of malty notes too - quite nutty, with some toffee and caramel as well. I assumed these elements, and the relatively dark colour, were due to the use of Crystal malt but Mr Dredge assured me that was not the case and the malty elements are derived from Aromatic malt, which is apparently a Munich type malt, often used in Belgian style beers such as Abbey Dubbels. This was a tasty and quite weighty mouthful but I have to admit it was not entirely to my taste, inhabiting an area somewhere between a paler aromatic IPA and the fuller, roasted feel of a black IPA, with a fair amount of sweetness. I have felt the same about some of the fatter, sweeterCrystal-influenced IPAs I have tried in the USA so it's just a matter of personal preference. 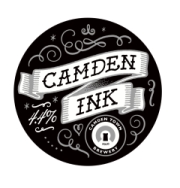 The pick of the bunch for me was Camden Ink, a 4.4% dry stout which had launched a few days earlier. Maybe mounting a major challenge to Guinness is a somewhat distant prospect, but that's the market sector it's clearly aimed at. And it's a far more enjoyable beer for me in every respect. Yes, it's inky black. Yes, it has a creamy head and consistency but it isn't nitro'd to within an inch of it's life, nor was it chilled out of all recognition. On the palate it's dry and smooth but much richer and more flavourful than Guinness, with subtle coffee ground and dark chocolate notes apparent alongside the roasty malt. There's a pleasing bitterness here but it's coming as much from good use of hops as from burnt malt. As you may have guessed, I was rather impressed. 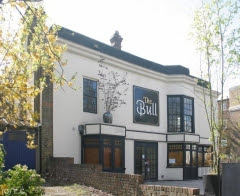 As easily as I could have remained ensconced in the Craft, it was then on to a bus, over the hill and far away to the Bull in Highgate, which I have written about before. This is a truly integrated operation with the tiny brewery (using the name London Brewing Co) squeezed into the kitchen so that the brewer, Steve Grey, literally has to rub shoulders with the chef. He seems to spend a fair amount of time pouring and serving too. A couple of weeks ago Gazza Prescott, hophead supreme from Steel City Brewing, dropped in for a collaboration brew. Given Gazza's leftward leanings and the presence of a certain grave in the nearby cemetery, naming the 4.3% collaboration brew Full Marx was a no-brainer. Knowing Gazza's preferences, I was expecting some pale IBU insanity. However, whilst the beer was indeed very pale in colour, the hopping was relatively restrained (for Gazza) with as much emphasis on flowery, aromatic character as bittering. According to Steve, had Gazza been given an entirely free rein, the beer would have been "too hoppy for Highgate". There was a bit of sulphur and some farmyard/manure notes on the nose. And I mean that in a good way. The mouthfeel was clean and firm. Overall, this was a hoppy, but well-balanced and immensely drinkable brew.

Also on show for the first time was Pi Eyed - well it used the Pi symbol on the pump clip but I don't know how to type that. This was a darkish red, fruity and slightly sweet Wintery number. Some sharp notes in the fruit on the palate provided a balancing and agreeable old ale type character. I found this a satisfying and tasty beer too.

I very much like the Bull as a pub. Unlike a lot of refurbishments, it gets the balance right on many levels. And it's good to see the brewing side of things doing well too.
Posted by chriso at 15:18 4 comments